We Have Always Lived in the Castle 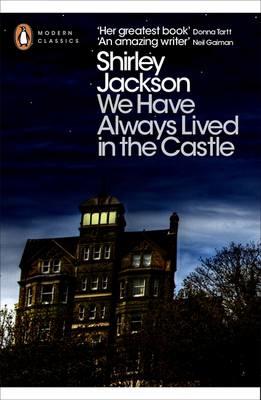 We Have Always Lived in the Castle

Shirley Jackson's masterpiece: the deliciously dark and funny story of Merricat, tomboy teenager, beloved sister - and possible lunatic.
'Her greatest book ... at once whimsical and harrowing, a miniaturist's charmingly detailed fantasy sketched inside a mausoleum ... Through depths and depths and bloodwarm depths we fall, until the surface is only an eerie gleam high above, nearly forgotten; and the deeper we sink, the deeper we want to go' Donna Tartt, author of The Goldfinch
Living in the Blackwood family home with only her sister Constance and her Uncle Julian for company, Merricat just wants to preserve their delicate way of life. But ever since Constance was acquitted of murdering the rest of the family, the world isn't leaving the Blackwoods alone. And when Cousin Charles arrives, armed with overtures of friendship and a desperate need to get into the safe, Merricat must do everything in her power to protect the remaining family.
This Penguin edition includes an afterword by the acclaimed novelist Joyce Carol Oates. All Shirley Jackson's other novels, plus The Lottery and Other Stories, are available in Penguin Modern Classics.
Shirley Jackson was born in California in 1916. When her short story The Lotterywas first published in The New Yorker in 1948, readers were so horrified they sent her hate mail; it has since become one of the most iconic American stories of all time. Her first novel, The Road Through the Wall, was published in the same year and was followed by five more: Hangsaman, The Bird's Nest, The Sundial,The Haunting of Hill House and We Have Always Lived in the Castle, widely seen as her masterpiece. In addition to her dark, brilliant novels, she wrote lightly fictionalized magazine pieces about family life with her four children and her husband, the critic Stanley Edgar Hyman. Shirley Jackson died in her sleep in 1965 at the age of 48.
'The world of Shirley Jackson is eerie and unforgettable ... She is a true master' A. M. Homes
'A masterpiece of Gothic suspense' Joyce Carol Oates
'If you haven't read We Have Always Lived in the Castle ... you have missed out on something marvellous' Neil Gaiman