The Last Chronicle of Barset: The Chronicles of Barsetshire 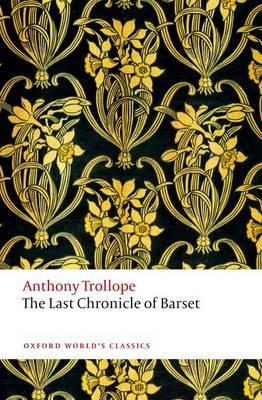 The Last Chronicle of Barset: The Chronicles of Barsetshire

'All Hogglestock believed their parson to be innocent; but then all Hogglestock believed him to be mad.'
Josiah Crawley lives with his family in the parish of Hogglestock, East Barsetshire, where he is perpetual curate. Impoverished like his parishioners, Crawley is hard-working and respected but he is an unhappy, disappointed man, ill-suited to cope when calamity strikes. He is accused of stealing a cheque to pay off his debts; too proud to defend himself, he risks ruin and disgrace unless the truth can be brought to light. Crawley's predicament divides the community into those who seek to help
him despite himself, and those who, like Mrs Proudie, are convinced of his guilt. When the Archbishop's son, Major Grantly, falls in love with Crawley's daughter Grace, battle lines are drawn.
The final volume in the Barsetshire series, The Last Chronicle draws to a close the stories of many beloved characters, including the old Warden, Mr Harding, Johnny Eames, and Lily Dale. Panoramic in scale, elegiac and moving, it is perhaps Trollope's greatest novel.
ABOUT THE SERIES: For over 100 years Oxford World's Classics has made available the widest range of literature from around the globe. Each affordable volume reflects Oxford's commitment to scholarship, providing the most accurate text plus a wealth of other valuable features, including expert introductions by leading authorities, helpful notes to clarify the text, up-to-date bibliographies for further study, and much more.