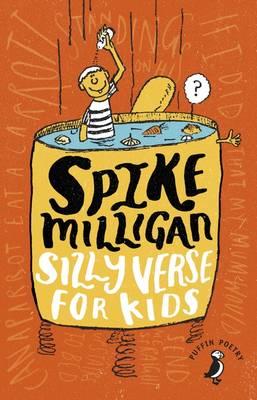 Silly Verse for Kids - a hilarious collection of silly poems by Spike Milligan!
A collection of the absurd, ridiculous, sublime and characteristically anarchic verse from the brilliant Spike Milligan. With his very own illustrations, this collection, which includes the famous On the Ning Nang Nong will make you laugh from the bottom of your belly - just like Spike did.
The legendary and iconic figure, Spike Milligan was born at Ahmednagar in India in 1918. He received his first education in a tent in the Hyderabad Sindh desert and graduated from there, through a series of Roman Catholic schools in India and England, to the Lewisham Polytechnic. He then plunged into the world of Show Business, seduced by his first stage appearance, at the age of eight, in the nativity play of his Poona convent school. He began his career as a band musician, but became famous as a humorous scriptwriter and actor in both films and broadcasting. He was the creator, principal writer and performer of the infamous Goon Show. Spike received an honorary CBE in 1992 and Knighthood in 2000. He died in 2002.
Other children's books by Spike Milligan:
Bald Twit Lion; Badjelly the Witch; Dip the Puppy; Sir Nobonk and the Terrible Dreadful Awful Naughty Nasty Dragon; A Children's Treasury of Milligan: Classic Stories and Poems; The Magical World of Milligan