Making Globalization Work: The Next Steps to Global Justice 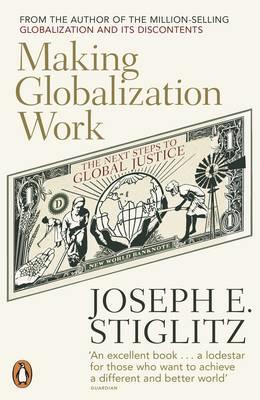 Making Globalization Work: The Next Steps to Global Justice

From Nobel Prize winner Joseph Stiglitz, Making Globalization Work gives real, concrete ways to deal with third world debt, make trade fair and tackle global warming.
In Globalization and its Discontents Joseph Stiglitz changed the views of the public and world leaders alike by showing why globalization doesn't work for the world's poor.
In this bold, ambitious follow-up, Stiglitz shows how powerful organizations such as the UN, the IMF and the World Bank can be made to consider everyone's interests.
Stiglitz examines how change has occurred rapidly over the past four years, proposing solutions and looking to the future. He puts forward radical new solutions to the seemingly intractable international problems which we face - in forms that are more likely to be accepted both by the US and the developing world than previous proposals.
Another world is possible, he argues, and is not only morally right, but of benefit to us all.
'Passionate, engaging ... he speaks from the heart as well as the head'
Independent
'The man with a mission to save the poor ... offers a wealth of ideas for global reform'
The Times
'A searing critique of conventional wisdom'
Newsweek
'An excellent book ... a lodestar for those who want to achieve a different and better world'
Guardian
Joseph Stiglitz is one of the world's best-known economists. He was Chief Economist at the World Bank until January 2000. Before that he was Chairman of President Clinton's Council of Economic Advisers. He is currently Professor of Finance and Economics at Columbia University. He won the Nobel Prize for Economics in 2001 and is the author of the bestselling Globalization and Its Discontents and The Roaring Nineties, both published by Penguin.