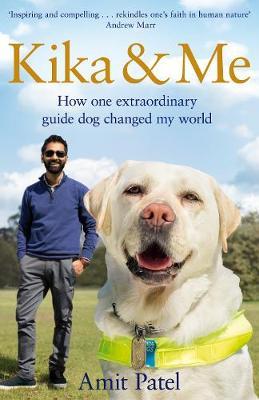 'Inspiring and compelling . . . rekindles one's faith in human nature' - Andrew Marr
'An incredible story of courage, perseverance and, ultimately love' - Sun
'The most moving book of the year' - The Lady

'Inspiring and compelling . . . rekindles one's faith in human nature' - Andrew Marr
'An incredible story of courage, perseverance and, ultimately love' - Sun
'The most moving book of the year' - The Lady
Amit Patel is working as a trauma doctor when a rare condition causes him to lose his sight within thirty-six hours. Totally dependent on others and terrified of stepping outside with a white cane after he's assaulted, he hits rock bottom. He refuses to leave home on his own for three months. With the support of his wife Seema he slowly adapts to his new situation, but how could life ever be the way it was? Then his guide dog Kika comes along . . .
But Kika's stubbornness almost puts her guide dog training in jeopardy - could her quirky personality be a perfect match for someone? Meanwhile Amit has reservations - can he trust a dog with his safety? Paired together in 2015, they start on a journey, learning to trust each other before taking to the streets of London and beyond. The partnership not only gives Amit a renewed lease of life but a new best friend. Then, after a video of an irate commuter rudely asking Amit to step aside on an escalator goes viral, he sets out with Kika by his side to spread a message of positivity and inclusivity, showing that nothing will hold them back.
From the challenges of travelling when blind to becoming a parent for the first time, Kika & Me is the moving, heart-warming and inspirational story of Amit's sight-loss journey and how one guide dog changed his world.