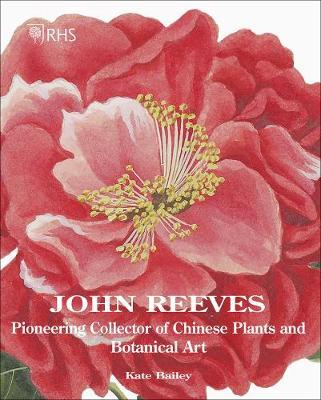 This is the story of the Reeves Collection of botanical paintings, the result of one man's single-minded dedication to commissioning pictures and gathering plants for the Horticultural Society of London.
Reeves went to China in 1812 and immediately... Read more

This is the story of the Reeves Collection of botanical paintings, the result of one man's single-minded dedication to commissioning pictures and gathering plants for the Horticultural Society of London.
Reeves went to China in 1812 and immediately on arrival started sending back snippets of information about manufactures, plants and poetry, goods, gods and tea to Sir Joseph Banks. Slightly later, he also started collecting for the Society but despite years of work collecting, labelling and packing plants and organising a team of Chinese artists until he left China in 1831, Reeves never enjoyed the same degree of recognition as other naturalists in China.
This was possibly because he had a demanding job as a tea inspector. Reeves himself never claimed to be a professional naturalist and the plant collecting and painting supervision were undertaken in his own time. Furthermore, fan qui (foreign devils) were restricted to the port area of Canton and to Macau, so that plant-hunting expeditions further afield were impossible. Furthermore, Reeves never published an account of his life in the country, unlike Clarke Abel and Robert Fortune, but he left us some letters, notebooks, drawings and maps.
The Collection is held at the Royal Horticultural Society's Lindley Library in Vincent Square, London. It is a magnificent achievement. Not only are the pictures accurate and richly coloured plant portraits of plants then unknown in the West, but they stand as a record of plants being cultivated in nineteenth-century Canton and Macau. In John Reeves: Pioneering Collector of Chinese Plants and Botanical Art, Kate Bailey reveals John Reeves' life as an East India Company tea inspector in nineteenth-century China and shows how he managed to collect and document thousands of Chinese natural history drawings, far more than anyone else at the time.