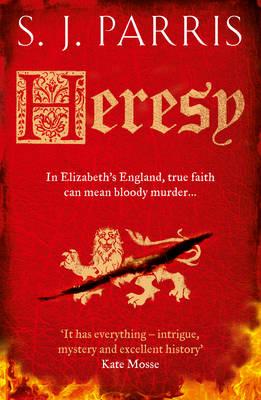 The first book in the No. 1 Sunday Times bestselling series following Giordano Bruno, set at the time of Queen Elizabeth I

The first book in the No. 1 Sunday Times bestselling series following Giordano Bruno, set at the time of Queen Elizabeth I


Oxford, 1583. A place of learning. And murderous schemes.

The country is rife with plots to assassinate Queen Elizabeth and return the realm to the Catholic faith. Giordano Bruno is recruited by the queen's spymaster and sent undercover to expose a treacherous conspiracy in Oxford - but his own secret mission must remain hidden at all costs.

A spy under orders. A coveted throne under threat.

When a series of hideous murders ruptures close-knit college life, Bruno is compelled to investigate. And what he finds makes it brutally clear that the Tudor throne itself is at stake...
Perfect for fans of C. J. Sansom and Hilary Mantel

'A delicious blend of history and thriller' The Times
'An omnipresent sense of danger' Daily Mail
'Colourful characters, fast-moving plots and a world where one false step in religion or politics can mean a grisly death' Sunday Times
'Pacy, intricate, and thrilling' Observer
'Vivid, sprawling ... Well-crafted, exuberant' Financial Times
'Impossible to resist' Daily Telegraph
'An atmospheric and well-written historical thriller' Guardian
'Twists and turns like a corkscrew of venomous snakes' Stuart MacBride
'It has everything - intrigue, mystery and excellent history' Kate Mosse
'The period is incredibly vivid and the story utterly gripping' Conn Iggulden
'A brilliantly unusual glimpse at the intrigues surrounding Queen Elizabeth I' Andrew Taylor
"Rich in both historical detail and ingenious twists" Sam Bourne (bestselling author of The Righteous Men)