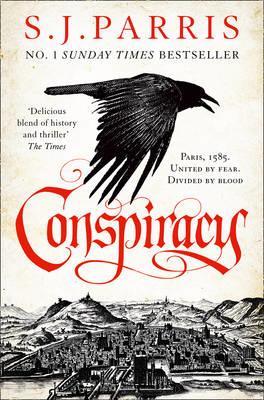 
A KING WITHOUT AN HEIR

Heretic-turned-spy Giordano Bruno arrives in Paris to find a city on the edge of catastrophe. King Henri III lives in fear of a coup by the Duke of Guise and his fanatical Catholic League, and another massacre on the streets.

A COURT AT WAR WITH GOD

When Bruno's old rival, Father Paul Lefevre is found murdered, Bruno is drawn into a dangerous web of religious politics and court intrigue. And watching over his shoulder is the King's mother, Catherine de Medici, with her harem of beautiful spies.

A DEADLY CONSPIRACY IN PLAY

When murder strikes at the heart of the Palace, Bruno finds himself on the trail of a killer who is protecting a terrible secret. With the royal houses of France and England under threat, Bruno must expose the truth - or be silenced for good...

'A delicious blend of history and thriller' The Times
'An omnipresent sense of danger' Daily Mail
'Colourful characters, fast-moving plots and a world where one false step in religion or politics can mean a grisly death' Sunday Times
'Pacy, intricate, and thrilling' Observer
'Vivid, sprawling ... Well-crafted, exuberant' Financial Times
'Impossible to resist' Daily Telegraph
'Twists and turns like a corkscrew of venomous snakes' Stuart MacBride
'It has everything - intrigue, mystery and excellent history' Kate Mosse
'The period is incredibly vivid and the story utterly gripping' Conn Iggulden
'A brilliantly unusual glimpse at the intrigues surrounding Queen Elizabeth I' Andrew Taylor